Though the Florida Legislature almost abrogated permanent alimony in Florida over the past several years, a recent decision from Florida’s 4th District Court of Appeal affirms that permanent alimony remains “alive and well” in certain long-term marriages, in Florida. Florida Statute 61.08 (Florida’s alimony statute) defines a long- term marriage as a marriage that has a duration of seventeen (17) years or more. If a marriage is long-term, there remains a rebuttable presumption in favor of awarding the non-income earning spouse permanent alimony.

On October 13, 2016, the 4th District Court of Appeal overturned a trial court’s denial of Wife’s request for permanent alimony, in favor of an award of durational alimony.  Berger v. Berger, 2016 WL 5940058 (Fla. 4th DCA, October 13, 2016). In Berger, the Husband and Wife had a long-term marriage lasting 18 years.  The Husband was a physician and primary income earner, and the Wife was a “stay at home mother” for nearly the entire marriage, but had a degree in social work. The trial court only awarded the Wife durational alimony for ten (10) years, rather than permanent alimony, reasoning that she “should” be able to obtain employment, as a teacher, within two (2) years.

Despite the trending alimony reform movement and Senate Bill 668 being a “hot topic” in Florida, this case shows that permanent alimony remains alive and well in Florida, pending any further legislative action. The Board Certified expert family law attorneys at Sidweber and Weintraub, P.A. are specialists in dealing with alimony and other family law issues, and can provide qualified personalized legal advice as it relates to your particular matter.

Breaking News – Governor Scott has vetoed the alimony bill, in part due to the time sharing portion of the bill. 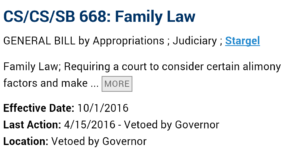 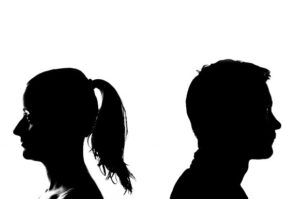 Orlando Weekly reported that things are getting tense at the Governor’s office at Old Capital.  Men, women and children are demonstrating in support of their position to approve or veto the bill.  The Governor has 5 more days to decide.    We are keeping a close eye on the developments regarding the proposed bill.