According to the Supreme Court of Florida’s Oral Argument Press Summary of last week, in the case of Hahamovitch v. Hahamovitch, the following matter will be heard:

Before they wed, Dianne and Harry Hahamovitch signed a premarital agreement; when they divorced, they disagreed as to the meaning of the agreement. The trial court agreed with the former husband; the Fourth District Court of Appeal upheld the trial court but certified a question of great public importance for this Court’s review concerning the scope of agreements such as the one signed by the Hahamovitches.

Oral arguments are set to begin at 9:10am and can be viewed at http://wfsu.org/gavel2gavel/live.php.

The law firm of Sidweber & Weintraub, P.A., would like to congratulate Karen B. Weintraub, Esquire. for being ranked in the top 5% for 2015. Ms. Weintraub has received a 8.4 Avvo Rating through an evaluation process of attorneys across the country! 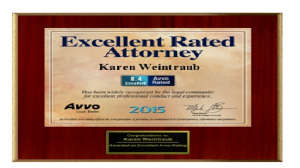 The firm of Sidweber & Weintraub, P.A., is proud of her recent recognition.

The Board Certified expert family law attorneys at Sidweber and Weintraub, P.A. are specialists in dealing with family law issues, and they can advise you as to the particulars of your case.

On August 21, 2014, U.S. District Judge Robert L. Hinkle of Tallahassee ruled that Florida’s gay-marriage ban is, in fact, unconstitutional. This is the first decision rendered by a court of this State that actually has a statewide impact. This Federal Judge ordered the State of Florida to allow same sex couple to marry and to recognize legal same sex marriages performed out of state. The Florida Attorney General’s office has until September 22, 2014 to decide whether to bring this matter before the U.S. 11th Circuit Court of Appeals in Atlanta, GA. However, in the interim, Judge Hinkle did stay the effects of most of his ruling, pending appeal. END_OF_DOCUMENT_TOKEN_TO_BE_REPLACED