According to the Supreme Court of Florida’s Oral Argument Press Summary of last week, in the case of Hahamovitch v. Hahamovitch, the following matter will be heard:

Before they wed, Dianne and Harry Hahamovitch signed a premarital agreement; when they divorced, they disagreed as to the meaning of the agreement. The trial court agreed with the former husband; the Fourth District Court of Appeal upheld the trial court but certified a question of great public importance for this Court’s review concerning the scope of agreements such as the one signed by the Hahamovitches.

Oral arguments are set to begin at 9:10am and can be viewed at http://wfsu.org/gavel2gavel/live.php. 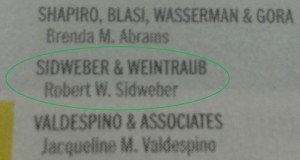 The Firm would like to congratulate Robert W. Sidweber for being named as one of Florida’s 2015 Best Lawyers in the area of Family Law.

We are excited to announce Robert Sidweber’s new page featuring his mediation services on our LinkedIn Company Page.

Generally speaking, under the child support guidelines, the more overnights a parent spends with their child or children, the less child support is paid. The child support guidelines mandate that the trial court make this adjustment. Many litigants who are fighting child support issues are aware of this and understand it. However, what if your Marital Settlement Agreement or Parenting Plan, which has earlier been incorporated into your Final Judgment of Dissolution of Marriage, says that you have 18% overnights with the children, but in reality you have actually been exercising 40% overnights with the children, with the approval and understanding of your former spouse? Shouldn’t you be entitled to a reduction in your child support? Under a very recent amendment to the statute, you do get such a reduction. END_OF_DOCUMENT_TOKEN_TO_BE_REPLACED